Me and Sam came up with our book idea with a dream I had when I was younger. We decided that this would be a great story to tell.
Our book is about a child named Joseph who goes to school and has assignment where he has to make a paper airplane. He has a problem however, he doesn't know how to, so he must find his Grandpa who knows how to. The biggest thing I hope Nicaraguan children will get out of this is to know how to read better, and to hopefully enjoy what we wrote for them. 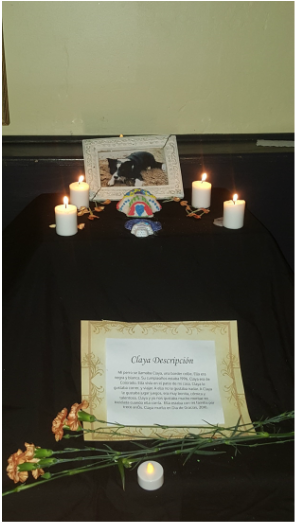 Day of the Dead is a tradition honoring the ones you loved or your family that are no longer with you as opposed to repressing it or just being sad as they do in other countries. It originated in Central America and Spain, the conquistadors made a holiday between the two. It is celebrated on November 1st and second. It is celebrated in most countries in Central America but also in other countries such as Mexico prominently. The belief of Day of the Dead is that the dead come back for the two days. It is celebrated by making an altar for the deceased with items such as pictures of them, some of their items, the flower Marigold, decorated tissue paper, and other traditional things. The actual celebration includes dancing and other celebrations to remember the deceased. My mural was about my dog, Claya, and remembered her by having a picture of her, marigolds laid out, and then having candles and a sugar skull. If I were to do this better I would have possessions of my dog, but she died far too long ago to have or find the possessions. I would also have more pictures if I could, but could not find any more. Overall, I feel I was prepared well for this exhibition, and found that I was satisfied with how many people came today.
Claya Descripción